Introducing the new Hyundai i10 to Germany 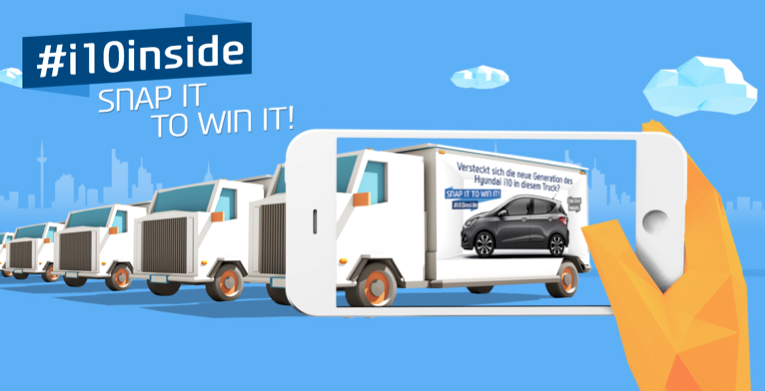 Hyundai wanted to introduce their brand new Hyundai i10 at Frankfurt’s IAA by doing something they had never done before: an actual activation on the streets.

We came up with #i10inside: Snap it to win it!. A real life cups and balls game for the people of Frankfurt. Ten trucks, all in a different color. Ten GPS transmitters, one Facebook map. If you share a picture of the right truck, tag it with #i10inside, you win the Hyundai i10.

We produced this pretty cool annotated Youtube video (together with Make ’em Say) and seeded the film via bloggers, social media and radio stations.

In the video, you can play the same kind of game everyone would be playing in Frankfurt.

We produced a Facebook app with a map updated in real time with the location of the ten trucks. The ‘prize winning’ truck was outfitted with a skycam, giving Facebook visitors hints (be it with a slight delay) about the truck’s location.

We also produced all i10 communication for the IAA stand at the autoshow, a variety of radio ads and taxi banners.

And ten trucks, of course.
.

We also got a team together to monitor all mentions on social media, making sure all participators jumped through the right hoops on Instagram, Facebook or Twitter.